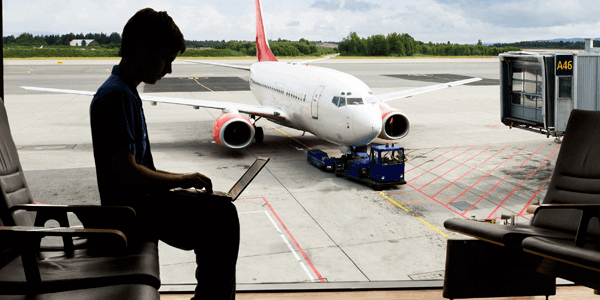 Communications regulator Ofcom has announced that it is looking to approve the use of a new satellite technology called "Earth Stations on Mobile Platforms". Ofcom say it's proposal to license three parts of the UK radio spectrum for satellite broadband will be concluded before the end of 2013. This licence could mean that we also see this type of technology providing high speed broadband on trains, ferries and cruise ships in 2014.

Check if your flight has on-board Wi-Fi

Savvy fliers wanting to know which aircraft offer on-board Wi-Fi can visit SeatGuru.com. Seat Guru offer an extraordinary wealth of information about on-board flight amenities. They can tell you everything from plug socket availability to in flight videos - even the width and pitch of your seat!

Giving passengers internet access on planes is not a new idea. The concept was trialled over 10 years ago - but it never took off! (pardon the pun). Historically in-flight internet access was patchy and sluggish, hampering users interest. But, now satellite technology has improved and the sharp increase in smartphones and portable Wi-Fi devices mean that the demand for high speed broadband is forcing the Airline industry forward. Amongst others Aer Lingus are currently testing on-board wi-fi and plan to install satellite broadband in it's entire A330 fleet. Aer Lingus also plan to make on-board Wi-Fi available on short-haul flights by 2014.

Norwegian is the first airline in Europe to offer it's passengers free superfast broadband. Norwegian have restricted this service to European flights and do not currently offer free broadband on long-haul flights. Users can switch off flight mode and log on to the aircrafts Wi-Fi network once it reaches an altitude of 10,000 feet.

To find out more about Norwegians introduction of satellite broadband and to learn how it all works watch the Euronews interview below.