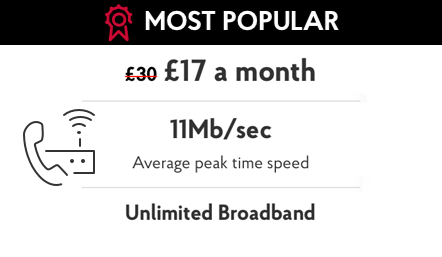 How do I switch my broadband to the Post Office?

Switching your broadband provider is a less painful exercise than it used to be. Before you begin the process, it's definitely worth making sure that you're outside of your contract tie-in with your current broadband provider. If you aren't then you will face a financial penalty and will probably be required to pay for each month that you have left on your contract. If you would like to switch to the Post Office broadband and your contract has ended, there is no need to contact your existing supplier. The switching process will be triggered by the Post Office. The exception to this is if your current provider is Virgin Media. In this instance, you will need to contact both the Post Office and Virgin Media to co-ordinate the start of your new service with the end of your old one.

Can I keep my telephone number if I switch to Post Office broadband?

How long will it take to switch my broadband provider to the Post Office?

From the moment you order your new Post Office broadband online to the date of installation is usually no more than 10 working days. This does not mean that you will be without service for 10 working days. The switch over process is normally completed within a few hours on the date of installation, so internet down time is minimal. If you don’t currently have a phone line, or are currently with Virgin Media, then this will delay the process as the broadband switch over cannot be completed until a phone line has been installed.

Can I get Post Office broadband without a phone line?

Will there be any loss of service if I switch to Post Office broadband?

If you're only switching your broadband to the Post Office and not your telephone service, then your switch over should be almost seamless. If you are switching both your phone and broadband provider, this will require an Engineer to visit your local telephone exchange. The switch over is usually complete within 3 hours of disconnection. If you are switching from Virgin Media, it is possible to keep your old broadband connection active until your Post Office broadband has been installed and is live.

The good the bad and the ugly. Read honest Post Office broadband reviews.

Post Office broadband review by KP 9 hours ago
Your review is waiting for approval from Fasterbroadband.
Review
As many other reviewers have posted....
I’ve been with PO since Jan 20. Frequently just drops out. Speed isn’t the best but that would be acceptable, but it’s the dropping internet for no reason for up to 15 min, multiple times a day. Tried all the usual remedies, but is clearly a feature of their service. Can’t wait to leave!
Show more
0 people found the following review helpful
AVOID - LIARS

Post Office broadband review by Jenny 1 day ago
Your review is waiting for approval from Fasterbroadband.
Review
A week ago when I was working from home due to the pandemic, my internet went down. I called in to speak to someone to get to the route of the issue. I spoke to a woman who reset the box and assigned me a new easy password (1 through to 9). She said give it 10 mins and then try logging on again under the new name and with the new password. Tried for half an hour and it kept saying incorrect password.
Called back up, had to go through the tedious security automated questions to be put through to a young man. He said the password should be 1 through to 8, not 9 and to try again. Again, it did not work so he said he would reset it AGAIN. After 4 times of resetting, the box stopped working altogether and the advisor told me there wasn’t even a signal through the box anymore, he apologised but said they had messed it up even more on their end and he had no choice but to send a new router and I had to wait up to 3 working days, I asked for an upgrade to a next day and he said that facility wasn’t physically available, but promised me it would arrive by the Friday.
No sign of the box Friday, so called that evening and spoke to another woman. She said it appeared the box hadn’t been sent and would offer me a £20 credit, but assured me she would send it out the following morning on a special delivery which would be guaranteed for the Monday, but I had to be home to sign for it. (Although on the Tuesday they said they didn’t have the facility to send special delivery - lies).
I proceeded to contact my manager and book the day off work, as I couldn’t work from home due to no wifi, and had to wait at home for my new router.
I called on Sunday and spoke to a man who confirmed my order would arrive Monday, and had been sent special delivery.
Monday morning and I called post office to ask for tracking, someone said they would call me back within the hour - lies. Called 2 hours after my initial call on the Monday asking for tracking and said nobody called me back, and the man said “Aaron has taken this on and will call you with an update when he has one”.
It got to 3pm and still no sign. Called again and spoke to a woman who put me on hold 6 times, trying to get a tracking reference was like pulling teeth. She then proceeds to tell me it has been despatched TODAY and would take up to a week to arrive. The tracking reference she gave doesn’t work and isn’t registered with Royal Mail.
As a key worker in the midst of a pandemic, not being able to work because of the pack of lies I have been continuously told; I have had no choice but to dump them and cancel my direct debit... if I could give a review less than ‘poor’ I would. It’s an absolute shambles and I have no idea how they haven’t gone bankrupt. I asked to speak to a manager and was told ‘no managers take calls’ - WOW. It’s an absolute disgrace of a company. They state all calls are recorded but clearly nobody listens back to them, even after being asked to.
Show more
2 people found the following review helpful
DO NOT SIGN UP

Post Office broadband review by dom 3 days ago
Your review is waiting for approval from Fasterbroadband.
Review
I've had post office internet for almost 2 years now, it is absolutely terrible.
Regularly cuts out for a minute to 5 minutes at a time, even if your devices are connected via ethernet cable.
Customer service is horrendous, awful automated phone system.
You can't pay bills over the internet.

I got this internet because they were the same price as the other options and I had never known post office do internet, now I know why nobody uses them.
Show more
0 people found the following review helpful
Do not use this ISP

Post Office broadband review by AndyGi 5 days ago
Your review is waiting for approval from Fasterbroadband.
Review
This is an unreliable service that I am leaving half way through my contract. I am paying a hefty early leaver fee to be rid of an unreliable service. It is absolutely hopeless.
Show more
0 people found the following review helpful
Gives rubbish a bad name!

Post Office broadband review by Fedup 8 days ago
Your review is waiting for approval from Fasterbroadband.
Review
Absolute rubbish. Been with this provider for 10 plus yrs with mostly nothing bad to say. HOWEVER in last 18 months it has got worse and worse. Broadband dropping in and out, re booting sometimes three times a night due to buffering wtc just to watch TV. Put it down to PC and possibly router. Router bandwidth tweaked and it improved slightly. Until the summer. A lightening strike to a nearby telegraph pole frazzled the router and my desktop. New router requested. Took A MONTH to replace (as they decided to cancel the request as they thought the case was closed because I was forced to buy a new one in order to work and earn my living in the meantime!). Kept seeing Openreach guys up the pole (then I put 2 and 2 together and realised the lightening had hit it some months before). In process they crossed my line with another. Reported it in October, fobbed off with 'Openreach dealing with it' and then they pass buck to third party contractor that apparently must dig up road, replace cable etc...but appears to be doing nothing. Shrugged shoulders effectively. Now been over six weeks with no landline and broadband so sporadic and feeble that we can't watch any digital channels or use the internet reliably. Drops out during my work = loss of income as I'm a self employed freelancer. AND they have hiked their prices three times in the last year.
Rubbish,rubbish rubbish. SO disappointed in the dreadful decline of what was once a good provider.
Show more
0 people found the following review helpful
Very poor

Post Office broadband review by Colin 9 days ago
Your review is waiting for approval from Fasterbroadband.
Review
Its bad enough that I have issues with Post Office Broadband but when you call to explain your issues they check your line and tell you there is no problem. I know there is no problem with my line as I have had two other providers with no issues. They also talk to you as though you have never had broadband. I would like to get out of my contract it will cost me money but I will have to accept that to get a supplier that that wants my business. I have had suppliers before with out the issues. My advice is stay well clear.
Show more
0 people found the following review helpful
Keep well away

Post Office broadband review by Teddlkprt 9 days ago
Your review is waiting for approval from Fasterbroadband.
Review
Awful service, £60 charge for moving house and make you wait 2 weeks to even get your internet up and running. While still adding your monthly bills on top. Send to debt collector soon as its over £70 worth of bill, even though your actively paying what you can, even though you set up a payment plan with debt collectors they still don't reactivate connection and expect to reconnect when the bills are paid. Heaven forbid anyone who is struggling, post office don't help or aren't considerate, they just want the money.
Show more
0 people found the following review helpful
Post office - Avoid like Chlamydia

Post Office broadband review by Mr T 12 days ago
Your review is waiting for approval from Fasterbroadband.
Review
So. Ur thinking of signing up to the post office.... please stop, take your hand, slap yourself around the face and say " do i want to make my life miserable " you will get Internet 90% of the time but frequently disconnects. Your WiFi will be slower than an Amstrad 64. If I could give 0 stars I would. Its the sort of company you hope goes under in these testing times
Show more
1 people found the following review helpful
Post Your Review