Is TalkTalk Broadband any good? 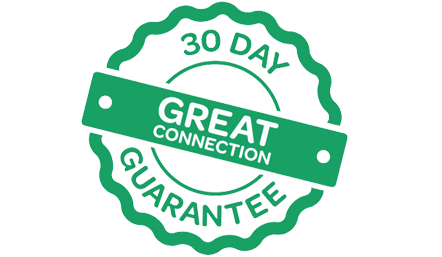 This is TalkTalk's basic broadband option and is provided via a copper ADSL phone line. The speed of your connection will depend on the distance between your home and the phone exchange. TalkTalk will give you an estimated connection speed when you sign up. At least 50% of TalkTalk customers who choose this package achieve a connection speed of 11Mbps during peak times. This package is usually adequate for basic TV streaming and browsing the internet.

The average download speed of this package is 38Mbps, over 3x faster than standard broadband! This package is perfect for homes with multiple devices streaming TV, playing online games and downloading large files at the same time.

Over 6x faster than standard broadband, TalkTalk Superfast Fibre has an average download speed of 67Mbps. It comes with the new, award-winning Wi-Fi Hub to offer you the best Wi-Fi signal around your home. This package is perfect if you want to stream Ultra HD movies without buffering, even when multiple users are online.

Can I use my own router with TalkTalk

Absolutely! If your tech savvy and want to use your own router you should have no problems connecting it to TalkTalk Broadband. The settings vary depending on the connection type, ADSL & Fibre. If you're using a non-TalkTalk router with TalkTalk's TV service, you'll need to configure IGMP for it to work correctly. IGMP is the data that your TalkTalk TV box uses to enable Internet channels, not all routers can support this. For the less adventurous customer don't worry the free WiFi router (worth over £120) supplied with TalkTalk Fibre broadband is an award winning bit of kit!

All internet service providers have to offer customers a cooling off period, this is normally about two weeks. However, they then advise you that your broadband speed will take up to two weeks to stabilise, after which you are locked into your contract. The 30 day great connection guarantee is a confident offer from TalkTalk. Here's how it works...

The 30-day guarantee applies to fibre connections only, fibre broadband customers are free to leave without any termination penalties if they're unhappy with their broadband connection within the first 30 days of being connected. All they need to do is call TalkTalk to cancel their contract within the first 30 days. They will then be sent a pre-paid bag to return TalkTalk's equipment. Once TalkTalk receive their equipment, a pro-rata refund is issued for any days the customer has not used the service. Set-up fees and delivery charges are non-refundable.

The 30 day great connection guarantee applies to all services purchased within a bundle from TalkTalk: For example, if a broadband customer has signed up for other services, like TalkTalk TV, then a termination of that service will be included within the guarantee.

Do I need Fibre broadband to watch TalkTalk TV?

To stream TalkTalk TV or other similar online TV services like Netflix & BBC iPlayer it’s advisable to have at least 3Mbps. This would be adequate to stream a Standard definition (SD) program. To stream TV in high definition (HD) it’s recommended you have a 5Mbps connection. To stream 4K TV ultra high-definition smoothly you’ll need to have a minimum speed of 25Mbps. It’s important to remember that your broadband connection speed is shared with other internet connected devices. So, streaming TV on two devices and a third device browsing the internet are going to need a combined broadband connection of at least 11Mbps. Remember broadband connection speeds can fluctuate during peak hours (8pm to 10pm). If you have multiple devices wanting to stream TV then a Fibre broadband package will give you the best experience. Use our broadband speed tester to check your download speed.

Can I get Talk Talk broadband without a phone line?

With any standard (i.e. ADSL) broadband connection the broadband is sent down the copper phone line. Even if you have Superfast fibre broadband the last part of the connection from the telephone exchange to your property still requires the phone line. To get TalkTalk broadband without a phone line you would need to order FTTP (Fibre to the Premises) 'TalkTalk Future Fibre' or 'Ultra Fibre Optic'.

1.0
936 reviews
Post review
Your review is waiting for approval from FasterBroadband.

TalkTalk broadband review
by Arveen Kapoor 2 days ago
worst customer service ever
Review
Worst customer service ever, spoke to manager and requested my partners name to be added on bill, filled up the form and 10 days later she was only added as a nominated user instead, then they say i will have to fill the form again, spoke to canecellation department and the guy started arguing with me instead of listening to me
Show more
Your review is waiting for approval from FasterBroadband.

TalkTalk broadband review
by N Drury 7 days ago
Very very happy
Review
Does what it says on the tin. Good speed no problems with Internet
Show more
Your review is waiting for approval from FasterBroadband.

TalkTalk broadband review
by Mahjabeen jawed 22 days ago
Awful service rude staff
Review
One of worse poor broadband internet service the staff is very rude don't do respect and don't listen to customers please avoid other wise you going to get stuck for 24 months
Show more
Your review is waiting for approval from FasterBroadband.

TalkTalk broadband review
by alice 27 days ago
Zero Customers Service zero connection
Review
no connection and zero customer service!!! I would rate ZERO if I could ! Worst ever broadband I have ever had with non-exist customer service. tried to phone them numerals times ended been transfered here and there a bunch of useless people who treat customers like mat who pay them each month for nothing but troubled. STAY CLEAR !!!!
Show more
Your review is waiting for approval from FasterBroadband.

TalkTalk broadband review
by MT 28 days ago
Dreadful beyond belief
Review
Dreadful on every front. Avoid if you have any expectation of being able to connect to any website (benign) without filtering. The homesafe/kidsafe filtering was set to off yet technical support couldn't fix it so I was left with a terrible service. Customer service experience was the most stress-inducing experience. I would rather pay more and go elsewhere
Show more
Your review is waiting for approval from FasterBroadband.

TalkTalk broadband review
by Sarah Beldon 1 month ago
Really disappointed
Review
I've been with Talk Talk for nearly 5 years now and unfortunately, I'm moving house where they already have an alternative system in place so I had no choice but to cancel.
Despite being with them for such a long period of time, they said I was still under a contract? And that I would have to pay a hefty cancellation fee. There was no waiver due to me being a good customer and they were unable to offer a system where I could pay it off monthly.
Due to moving house and the expense I've incurred, I'm unable to pay the cancellation fee, so need to leave Talk Talk installed in a property that's not mine, which is going to cause future tenants an issue potentially. So I'm going to be paying for a service that doesn't exist until I'm able to afford to pay the fee upfront.
Due to being a long term customer, I would have thought they would have enabled me to try to be flexible and accommodate.
I'm just really disappointed - everything else and all the other companies I've had to leave haven't had a single issue with and was equally able to do it online.
I had to make 2 phone calls that weren't able to go through due to system errors, then went through chat, only to be given an additional number - who then transferred me to an additional number. The process took ages, and the guy overly explained to me what the situation was - I understood, I just wasn't happy about it.
Show more
Post Your Review