Is Vodafone Broadband any good? 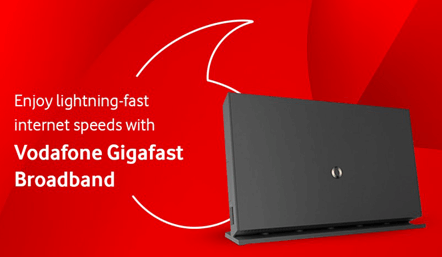 As well as their new Gigafast broadband (which currently has limited availability outside of key cities), Vodafone offer 2 additional fibre broadband FTTC (Fibre to the cabinet) packages with optional extra features. In-contract price rises may occur, but can be avoided if you select a package which includes the ‘Extra Plan’.

Vodafone now offer a 'Pro plan upgrade' which guarantees you Wi-Fi in every room or you can leave your contract for free. Vodafone sell the 'Pro' plan as an unbreakable broadband service. In the unlikely event that your home broadband fails Vodafone will automatically switch you to a 4G connection.

A deal agreed with Openreach in August 2020 means that Bristol, Birmingham and Liverpool residents will soon be able to access Vodafone’s Gigafast broadband too, via Openreach's 1Gbps network. 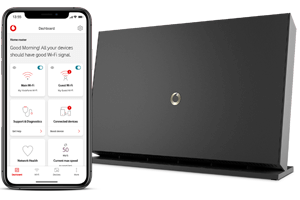 A free Vodafone Wi-Fi Hub router is included with any broadband package - and it's a great bit of kit! It supports dual-band Wi-Fi, including 802.11ac and offers four Gigabit Ethernet ports for any wired devices. The Vodafone router also supports beamforming Wi-Fi to maximise signal strength via it's 7 built-in aerials. The Vodafone Wi-Fi Hub can be controlled via an impressively clever app. You can take control of the Wi-Fi and set custom times when you want to limit access. You'll get a visual display of all of the devices that are connected at any time. You can set up a private guest network at the flick of a switch or block any devices you don't recognise.

Ever wished you could prioritise your broadband speed? Now you can! 'Boost your device speed' lets you prioritise the speed of any device on the network - perfect for when your work laptop is simultaneously competing against an Xbox and YouTubeHD! Vodafone also don’t use any traffic management, so your broadband speed will not be artificially slowed down during peak periods.

As with all broadband providers, Vodafone broadband packages include phone line rental. But, by default, Vodafone don't include evening and weekend calls. An 'Evening and Weekend' call plan can be added on for £4 per month or an "Anytime Landline & Mobile' call plan for £8 extra per month.

We regularly have access to exclusive offers with Vodafone e.g. £100 gift voucher for new customers. Currently, new and existing Vodafone 'pay monthly' mobile customers will receive up to £3 per month off any home broadband package.

Vodafone broadband had a rather disappointing customer complaints score in Ofcom's 2019 annual report. They received more than double the industry average of broadband complaints (115 complaints per 100K customers). Vodafone also fell short on their landline phone service. Sky and EE received the least amount of complaints in 2019. But, despite the disappointing customer complaints score the reality is that less than 0.2% of customers are dissatisfied. Taking into account the features and price point of their products, we would still recommend Vodafone broadband.

It’s good to know that Vodafone are one of the broadband providers that have signed up to Ofcom’s 'Broadband speed voluntary code of practice'. In reality, this means that Vodafone will provide you with a clear estimate of the broadband speed which you're likely to achieve. You will also be advised of the minimum guaranteed speed before you sign up. If your broadband falls below your guaranteed speed and Vodafone do not resolve it within 28 days, you have the right to cancel your contract without penalty.

2.1
27 reviews
Post review
Your review is waiting for approval from FasterBroadband.

Vodafone broadband review
by Simon G 19 days ago
Resist the temptation to save a few quid
Review
Patchy speeds at times, terrible app that either won't connect or declares the system fully healthy. Terrible customer service line that makes it really hard to speak to a real person and keeps trying to send you to the website to FAQ's (before finally relenting and putting you through to India). The system "had a glitch" that means all customers leaving get sent an email saying "thanks for staying"..! Glad we've left...
Show more
Your review is waiting for approval from FasterBroadband.

Vodafone broadband review
by Mark 2 months ago
Awful service, slow speeds
Review
Awful service. For the last 2 months connection keeps dropping off, router restarting, wifi disconnecting. After a call with customer service, they "update" my router and it works for a day and then same story again. Speeds are way too slow in the evening. And when you have no internet connection, you call customer service only to be told to go online....
Show more
Your review is waiting for approval from FasterBroadband.

Vodafone broadband review
by Sph 2 months ago
Good deal on ultrafast internet
Review
Great deal, paying less for 500Mb/s fibre than I was for VDSL with plusnet. Installation great, managed to get fibre line provision swapped to a (new) closer pole to remove problems with the old line snaking through trees. One small issue was resolved quickly by support (ultrafast pro customers seem to get UK support) Tech support listened and weren't following some annoying script. A1 from me. Now just waiting on my voucher which I got via uSwitch but it will take a few months
Show more
Your review is waiting for approval from FasterBroadband.

Vodafone broadband review
by Felipe 3 months ago
They disconnected my internet without my consent
Review
[Read until the end]
I had Vodafone for 2 years. It was never a perfect internet, it would not work sometimes, but I was overall happy with mainly because of the competitive price.
Every changed on the 6th March when I received those messages "sorry you are leaving" as if I had requested a disconnection. I phoned Vodafone and told them I did not request a disconnection. The woman on the phone was very kind and when I asked for a SMS confirmation she provided it straightaway confirming the disconnection request was cancelled. However, a month later 6th April, OpenReach started to work outside of my house, they had only parked the car and my wife went out to ask what was happening and told them we had not requested our internet to be disconnected, they apologised and left. The internet was working fine, in the afternoon of the same day, my internet suddenly stopped working.
I phoned Vodafone who then told me my internet was disconnected as requested by me. Regardless of what I told them a month before and regardless of telling them I had a SMS from them to prove it, they said there was nothing they could do and SKY had picked up my line. I told them I did not care about landline, I just needed internet as I work from home. They said I would have to wait at least until mid-May to get my internet restored and I would have to subscribe a 48-month contract. I explained to them my internet was working "a minute ago" how come now I have to wait until nxt month to get it connected. They made me speak with a different teams and different managers and nobody was able to simply restore my internet connection. This took me about 6 hours in different days talking to different teams.
On the 18th April I received an email with my monthly bill, charging me for the month of April/May. Then I phoned them again on the 19th April and told them this was unacceptable and I was not going pay for it and that they should not charge it to me. After a while they were trying to convince me to reconnect with Vodafone, but I still would have to wait at very least 2 weeks, which I undoubtely refused. The manager then phoned me back and said I was not going to be charged and apologised for all mess they had done.
27th April they charged me anyway, despite numerous calls and confirmation. This is such a messy company, I had never seen this in my life. Phoned them now again 2nd May and asked for refund and confirmation in SMS of the refund. I received SMS confirming it and hope I will get the refund too.
Whenever come to your mind the company you work for is disorganised, remember Vodafone is there to go above and beyond your bad expectations.
Show more
Your review is waiting for approval from FasterBroadband.

Vodafone broadband review
by Adam 3 months ago
Nothing to complain about so far
Review
I wanted the Wi-Fi hub delivering to a different address to where the broadband was due to be installed, the web chat assistant advised me I could do this when booking my broadband online. Was a little dubious and was expecting this to go horribly wrong but it didn't. Overall no problems with the switchover or the internet speed, Will be moving our mobiles to Vodafone when out of contract. Excellent communication!
Show more
Your review is waiting for approval from FasterBroadband.

Vodafone broadband review
by Ian Meek 3 months ago
Gave up in the end
Review
Had our street dug up to install superfast broadband and kept getting fliers through the door from Cityfibre telling us about it. When it came time to get a new broadband deal looked into it and, as a result, went with Vodafone. They set up a date for the activation and an engineer was to visit. I waited in all day, he never came, I had a lengthy web-chat, result of which was that my appointment had been cancelled for some reason. Very apologetic, set up another appointment. I told them not to send another router as we had one already. They sent another router. My partner waited in all day and no engineer appeared. I got involved in another lengthy webchat and they told me that the appointment had been cancelled by me?! I told them to forget it and went with another provider (Plusnet) and all has gone very smoothly. Ps. Got into another lengthy webchat with Vodafone as I didn't want to put two routers in landfill. They said they'd send me a couple of prepaid bags to return them in. That was two weeks ago. I still have two routers.
Show more
Post Your Review